I like Men's Health a lot, because it is one of the most practical, useful magazines I get. It covers fitness, diet, health (it is very big on prevention and self-diagnosis early, so as to avoid major health problems later), fashion (good stuff, trendy and basic, not latest-from-Paris kinds of stuff), relationships (carefully sneaked into a magazine that looks like it isn't about relationships -- clever, because men don't read magazines about relationship tips), finance, and other topics that come up. There are brief articles on each of these (this is the magazine I read while standing over the kitchen sink eating breakfast -- articles tend to be brief enough to finish in that period of time), and I appreciate the witty, upbeat style that is not pompous or pretentious, just good basic 'guy stuff'.

Alas, in each issue there is at least one article on 'how to drop five pounds this week' or 'how to lose 10 pounds by Easter' -- these look like they'll work and seem very reasonable, but I cannot comment on their effectiveness (would that I were able to!). I can comment on the effectiveness of time management, basic financial planning, and exercise routine advice -- these have worked for me. In fact, I credit many of the articles in this magazine with helping me to plan a graceful exit from my old job and into my new self-employment career and graduate school/seminary endeavour, by illustrating stories and giving useful advice.

There are also fun things, too, like a recent issue's back-page article on how to effectively tan, by the tan-master himself, George Hamilton. Do you know how to tie a bow-tie? This magazine had an article showing that, too.

This is not an 'in-depth' magazine, but then again, it doesn't pretend to be. Many of us work and live in a world that doesn't permit time-consuming research and consideration of essays on health and fitness, unless we are professional in that field. Thus, magazines like this fill a need. So far as health and fitness magazines are concerned, this one is a good one -- many magazines are veiled soft-core erotica. Men's Health does not avoid the topic of sex, but doesn't overplay it the way many do.

The magazine has a good graphic sense to it -- it illustrates the physical things discussed in photographs without as much embellishment as many other fitness magazines. Comparing this to several others on the magazine rack, it is understated, has less flash and more substance in the articles.

Definitely worth a look!

If you're looking for a men's magazine that will help to keep you informed on fitness, weight loss, nutrition, sex and style - then this is a magazine you will have an interest in.

The layout is simple, with the most important information highlighted to draw your attention. I have found this magazine to be extremely helpful in keeping myself fit. I find an abundance of useful material each week and there is always a recipe or something that I find myself trying out with each issue. Great stuff.

The most entertaining and useful Men's Health magazine

I eagerly look forward to every new issue of Men's Health. This magazine has it all. It's colorful, makes me laugh and almost always has something interesting to say-whether it's about women, fitness, careers and yes even men's fashion (gulp). The articles are not dry at all. In fact, they are quite unique, humorous and unpretentious (unlike a magazine that comes to mind starting with the letters GQ). And unlike most men's magazines, this one is for men of all ages.

You may not end up looking like the guy on the front cover, but if there is any magazine that can motivate you to look and feel better, this one can.

It's funny, but my husband subscribes to this magazine, and I subscribe to WOMENS HEALTH, but it's this one I prefer. I've finally nailed it down to it being just a little "sexier." As in, the celebrity profiles and the short pieces on sometimes pretty random things.

For instance, recently there was an article on Adrian Brody and all the weight he had to drop (plus learn to play piano!) in a very short period of time. He described locking himself in an apartment, all alone, because he knew he couldn't achieve new goals by living his life the way he had always done. That really resonated with me since I, too, am trying to achieve things I never have before. It's an inspiring, helpful magazine, and I think many women would benefit from reading it just as I do!

Plus, this month there's Josh Holloway, and who's going to say no to that? :)
Deidre

Why it is still a great investment

Men's Health is one of the most popular men's magazines because it meets the various expectations and needs of the modern man. You simply have to know about fitness, dieting, supplements, fashion, gadgets, etc. The annual subscription makes it a bargain and you get so much information for a few bucks. One of the most interesting sections is the one dedicated to bedroom activities. The tips are definitely useful and yet I highly recommend in addition the bestseller "scientfically guaranteed male multiple orgasms and ultimate sex" for the latest secrets in this area. Another key feature of the magazine is that it motivates you to stay healthy, lean and fit. There are weight loss tips, advice on how to eat and exercise in order to see results fast. This is important part of keeping sharp appearance. Overall, I can reasonably say that you will learn a lot, have fun reading it and most probably it will help you up to a certain limit to be a good looking man and great lover.

Never have I read a magazine for men with so much practical advice.
The articles on self-improvment don't just deal with exercise.
They include style tips, dating and sex help and travel information
along with other thought provoking articles
on men's issues such as the effects
of disease and divorce.
Worth every penny, month after month, year after year.

Women buy this too...

I buy this for my husband because he never thinks to buy it for himself since he hates shopping. But anyway, it has articles to help him at the gym, health information from a guys perspective, and workout routines he can adapt for his own use.

I find it entertaining and there is always
something you can learn about the way men
think and react to situations.

A magazine with a real personality.

I ordered these for my boyfriend and we both love them! There are so many great articles..not just a bunch of advertisements like most magazines are.

I picked up my first issue and I am very impressed. They have a plethora of interesting and useful information that make you stop and think. Good articles on all male topics like sports, fitness, health, sex, etc. Great read. Pick up a copy.

The magazine has plenty of good articles on health, exercise, nutrition, sex, etc.

This is one of the few magazines that I can actually read from cover to cover; it has tips on how to fight off sickness (i.e. cold, flu, etc.), how to exercise--I've found out what I've been doing wrong in my workouts as a result, and how to please a woman. 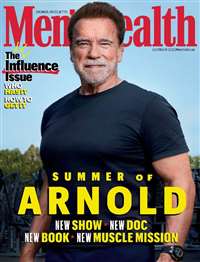