This magazine offers fun facts in a quick and witty way that even today's TV generation can enjoy. I look forward to receiving each new edition of the magazine, however that is only every 2 months. Also, as another reviewer pointed out, it is a thin magazine, but I will happily subscribe to a thin magazine that is chock full of content. It is not overstuffed with advertisements like most less expensive magazines are.

For the intellectually curious everywhere

Despite its name, this mag isn't just for brainy types. Anybody who's interested in knowing more quirky, fascinating things about the world around them -- presented in a highly readable, humorous style -- will find 'mental_floss' a fun read. Interested in the weird history of hackers? Ever wanted to know how to grow your own organs or wrestle an alligator? All written by your smart, funny friend from college -- or so the mag's super-accessible style will have you thinking. A definite recommend!

Impress your friends at cocktail parties...

...with the knowledge you gain from reading Mental Floss! The great thing about this mag is that it covers such a variety of subject matter that every issue has SOMETHING you're interested in. I like the quirky facts about famous people, and the easy-to-understand explanations of theories developed by history's most influential thinkers. It's great entertainment--
I've given it as a gift to several friends, and all are surprised by the unique content and humor. Plus, it's not every day you get to spend leisure time getting smarter. I look forward to the next issue!

Can't be stingy with your time...

...when you pick up mental_floss! I spend hours reading each issue; there's just so much there to absorb, so don't expect to pick up the magazine in a rush and hurry through it (though you CAN devour a few morsels on a lunch break or on the go, as long as you can pick it back up later). I love the variety of knowledge offered, and how sometimes the information touches on some interesting topic or tidbit that I have heard of before but never really known what it was. (For example, I've heard of the "vegemite sandwich" from the song, but didn't really know what it was until mental_floss!) It would make a great gift (for yourself, too)!

Am I the only person who is looking for light entertainment that leaves me refreshed? Mental_Floss never fails to grab my attention - even if I have just a minute to spend. Its storehouse of quirky information is the best! It's packed with wonderful facts I missed in my first 60 years of reading! Ten minutes of Mental_Floss and I'm ready to go again! Refreshed until the next time I pick it up. Try it! You'll like it.

My favorite magazine ever

I've been subscribing to mental_floss for about two years now, and still read every issue from cover to cover the same day it arrives. It's fun and light-hearted without being stupid, and touches on a wide range of topics. I've given several gift subscriptions, and most of the recipients liked it so much that they've renewed their subscriptions on their own.

Mental Floss is a magazine developed by two Duke undergrads. It's fresh and edgy, sometimes irreverent, and often downright silly. Imagine opening a magazine, and out pops a cocktail party full of Gen X intellectuals, animatedly discussing everything from art to zen. This is Mental Floss. Articles are not lengthy, but they are informative. If one needed to cram for a trivial pursuit competition, Mental Floss would be a great study tool. It familiarizes the reader with the basics, in a language that is accessible but not condescending. Anything and everything is fair game for a Mental Floss article, as long as it makes people think. Obscure scientific knowledge cozies up to pop culture, and bizarre facts are juxtaposed with sobering statistics.

Ken Jennings of Jeopardy! fame is a regular contributor. His "Six Degrees" column links two apparently unrelated words or phrases in six short steps. One month he was challenged to connect Wasabi (a spicy Japanese mustard) with Kemosabe (Tonto's pet name for the Lone Ranger, supposed to be a Native American word for faithful friend). Another issue has Jennings connecting the dots between PC (personal computer) and PC (politically correct).

Another regular feature is the "Know It All" column by A. J. Jacobs. An editor at Esquire magazine, Jacobs read the entire 32 volume Encyclopedia Britannica in his quest to become the world's smartest man. Now, in Mental Floss, he's sharing random facts based on a different alphabet letter in each issue. L, for instance, has A. J. discussing such diverse topics as the London Zoo, Ligers (offspring of a lion/tiger breeding), Liar paradox, and Lucky Luciano.

"The Dead Guy Interview" by Michael A. Stusser showcases a famous deceased person each month. Stusser's imaginary exchange with Sun Tzu is hilarious, though I found the Andy Warhol piece a bit macabre. I can imagine the inquisitive reader might be spurred on to read up on their history, just to get the inside jokes.

Mental Floss is intended for adults; some material may be inappropriate for preteens. I'd love to see a kid's version of Floss. It's an intriguing magazine and a subscription would make a fine gift.

Want to feel smart, even though YOU know the truth? then subscribe to MENTAL FLOSS, and have fun, laugh, and store up those tidbits to make you shine at the water cooler

Love it- a "charter" reader and love it even more now

I have been reading Mental Floss since the first issue (Einstein with his tongue out) and have been very pleased with their progress- better content,graphics, presentation- it's nice to see a "kid" grow up! If there's one thing I'd like to see done better- it's the editorial. I've always learned something new from each magazine- and I consider myself a well-informed reader always interested in keeping up. I have always ejoyed a variety of interests and Mental Floss satisfies most of my apetites in each issue- from black holes to Picasso to Mayan ruins to Bernstein - a full plate indeed. I have recommended it to several of my friends, giving them my old copies to peruse, and more often than not, they have subscribed and told me how much they loved it. One of my friends, a professor in a city college, has subscribed for his "kids" (students)ad has see these challenged kids go o to doing extremely well in local quiz shows/contests. Nuff said- now go find out for yourself.....

For The Ultimate Information Seeker!

Entertaining, Educational, Fun. In the age of so much disheartening info, this magazine is refreshing and is the ultimate find for those who can never get their fill of information. Love Mental Floss! One of the greatest ideas in a long time! 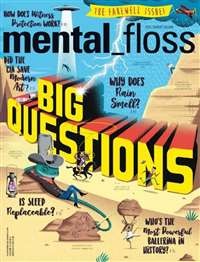