Another magazine published by the National Geographic Society, National Geographic Traveler lives up to the excellent tradition of its parent publication. Besides being a magazine about travel destinations, it also provides helpful tips on how to make your trip more fun, less hassle, and more safe. It includes a calendar of worldwide events and a geography quiz. There are tips on taking better pictures, how to get the best deal on rentals, and how not to make yourself a target for pickpockets. The magazine also covers locations on the internet to find more information.

The magazine gives equal coverage to popular tourist destinations around the world, such as Venice, the Bahamas, and Australia. But it also covers more out-of-the-way places too. Recent articles featured Toledo, Spain, the island of Tobago, and Chiapas, Mexico. The United States is not left out. There is usually a main feature on at least one American city, as well as one or two other articles on American destinations. Some recent articles featured Park City, Utah; the Little Big Horn country of Montana; Aspen, Colorado; and the Big Island of Hawaii. All the main feature stories include a comprehensive list of attractions in the vicinity, where to go and who to call for more information, places to stay, and favorite restaurants. The listing is a great source of information.

What I really like about this magazine is that it features places and activities that the person on an average budget can afford. Some other magazines, such as Travel & Leisure, emphasize exotic locations, luxurious resorts, and very expensive activities. Traveler discusses places anyone can visit and enjoy themselves, relax, and see the sights. This is the magazine for the budget conscious traveler.

If you've ever hungered for a well-written travel journal, with excellent photography, and a "help me get there" style, you won't be disappointed with National Geographic Traveler. This is a great travel magazine. Most people are well aware of the National Geographic Society. They have been
publishing their geographic, cultural, scientific, and even interstellar journal - National Geographic - since the turn of the century (the 20th that is). Yet, the sad fact is that many students in public schools are getting little incentive to "dive" into geography's many sub-categories.
Is there a way to make travel and educational learning fun? You bet! National Geographic tapped into a huge potential with the travel market and several years ago began publishing National Geographic Traveler.
National Geographic Traveler has been around for just a few years, but it already has become of one my two favorite magazines (the other being National Geographic). It is filled with fantastic photographs of places and people we all have wondered about. It is written with the traveler in mind, so it doesn't spend a lot of time in geographic education; but there is no doubt you and your kids will learn with each edition.
There are articles that cover all kinds of travel destinations. There's always an article or two on destinations in the states and usually one article on an accessible overseas spot, and usually another of what I call, a "challenging destination". Besides learning, they give useful information at the end of each article on "how to plan a trip", "how to get there", "getting around", "places to eat, sleep" and "things to see and do". It is a more than enough to take anyone who is semi-interested in discovering the world and give them lots to think about.
A recent National Geographic Traveler (Nov./December 1999) had a wonderful article on visiting Jerusalem. This is a place I've wanted to visit for many years, and the article, the photographs, and the information only made me more hungry to get there.
While National Geographic Traveler is high quality, its very practical. Drawbacks? Like many travel magazines it assumes the traveler has much more money than I do -- so it leaves you wondering if there is not another way to "get there" and "afford it".
Still its better than the other big travel magazines: "Conde' Nast" and "Travel and Leisure" which I find to be disorganized, uneducational, and even more geared for the big spender.
For me, National Geographic Traveler is the best out there!

I'm a travel magazine junkie. I've been subscribing to National Geographic Traveler magazine for over a year.

It seems to cover travel for people of all ages and budgets. There are articles about international travel and travel to destinations in the U.S. The Jan./Feb. 2000 issue had an article about canoeing in the Okeefenokee Swamp in Georgia - one of the cheapest trips you can take in the U.S. (I've never been there, but we have friends who take annual trips to the swamp). And there was also an article about Hong Kong - not necessarily for budget travelers.

The magazine is beautiful and slickly produced with excellent graphic design and photography. After most articles is a section called "travel wise" with pertinent travel info about the area: maps, how to get around, where to stay, what to eat, where to get more information. There are also travel news items, such as what to expect if you're subjected to a body search at an airport (apparently somewhat common in countries other than the U.S.). The back section, like most travel magazines, has an advertising section and cards to send off for more information.

A Great Magazine for the Dreamer

This is a great magazine for the dreaming traveler. Unless you have quite a bit of money, this may be as close as you get to some of these places, but que sera, sera. The photos are of National Geographics usual great quality, and every now and then you'll find something close enough to home to actually see.

It took less than a month for our order to be processed. Wow, what speed! So far, my husband and I are very impressed with the magazine. This magazine seems to offer something for everyone from both budget and interest perspectives. (Not just a travel magazine for the rich.) The photos are, of course, absolutely fabulous too.

perfect for that someone who has everything! national geographic and travel are the perfect combination to cover the world right!

I gave these as gifts to two adult family members who love to travel. They have thanked me a couple of times since saying they enjoy learning about new places they can travel and the information in the magazine is fascinating. Plus, they think of us every time a new issue arrives.

Sad but true: It seems the good folks at the Burundi Chamber of Commerce have decided to moth-ball the "Martinis and Mud-flaps" party bus, which formerly carried revelers to the famed Mukalata Mud Flats; this due to lackluster sales and some negative press involving a snippy supermodel, some unfortunately-clothed Hutu women, and a particularly vicious attack-chicken.

I can see the tabloid headlines now: "Clique Sicks Chick on Stick" and "Koo-koo Poo-poos Hutu Muu-muu." All this and, well...no Taco Bell pretty much finished 'em off. I guess mud, murder, and malaria just aren't the tourist draws they used to be.

Personally, if I'm gonna be mauled beyond recognition, I prefer hunky Leos to hungry lions--as would most folks I know--so the untimely demise of the Burundi Party Bus comes not entirely as a surprise I suppose. There exist among us, however, a fringe-element whose idea of fun includes wading through vermin-infested swamps with camera equipment strapped to their backs, clinging to sheer rock faces a thousand feet up in 110 degree heat, and pitching tents on ice sheets in 70-mile-an-hour head winds, stopping just long enough to ice-pick their blackened toes apart. All of this for the allure of dining on food squeezed from mylar tubes and the prospect of sucking deadly snake venom out of one's own thigh.

So lest you be confused by its categorization, National Geographic's Adventure is likely not your idea of a "travel magazine," at least not in the way most of us would think of such. Travel magazines traditionally include destinations and activities in which reasonably sane persons, not under the influence of mind-altering drugs or radical hormonal imbalances, would voluntarily engage without being forced at spear-point. So, thanks very much, but...

Still, personal accounts of such lunacy often make for an engrossing read. The clever editorial types at National Geographic understand this, and by appealing to America's inexhaustible appetite for loin-cloths, waterfalls, and animals that eat insects harvested from each others butt-fur, they have provided gainful employment for hairy socio-pathic photographers and wiry lesbian naturalists over much of the last century. Wildly successful for decades, the ultra-conservative magazine now finds itself in the same quandary faced by Reader's Digest: its still substantial subscriber base is populated by grouchy Republican grandmas both resistant to change and dropping like flies.

Since a face-lift is out, NG has chosen to appeal to new audiences and advertisers with Adventure, which at first appears to be a totally different concept, but is basically NG Lite--you know, "looks great, less filling." NG "Classic" built its journalistic reputation by hybridizing quality travel literature and art photography, enticing
readers with dramatic images and larger-than-life adventures recounted in first person as though we were actually there. True to form, Adventure also features luxurious photography and engrossing personal accounts, but in a slimmed-down, ultra-glossy format with oversized pages and contemporary design elements.

Also different is a new attitude; NGA's pix look less like art photos and more like stills from their tv specials (NG still stands head and shoulders above the crowd in the tv travelogue field), and include a fair number of "cheesecake shots"--panting pretties and mugging machos in spandex climbing shorts who occasionally look more than a little
lost. The editorial also has a more intimate, confidant tone than its predecessor and attempts to involve the reader more in the feeling and "ambiance" of travel.

So far so good--NG has managed a visually stunning face-lift while retaining a goodly portion of what made it a literary legend way back when. Overall, it's a very fine magazine covering a wide variety of interesting, and occasionally fascinating people, places, and things. NGA also keeps NG's low ad-ratio, an industry rarity I very much appreciated. In fact, the only big difference between Nat'l Geo and Neo-Geo is, in my opinion, also its least-successfully realized component. Unlike NG, Son of NG includes
articles targeted to the reader's own travel/adventure agenda, suggesting, by way of contributors, adventures for you and me. The problem lies in the strident, and often inadvertantly humorous, contrasts between the "adventures" of NGA writers and the "adventures" of NGA readers.

US: Plastic kayak nearly capsizes on blurry blonde in tempestuous four-foot-deep waters of a Santa Barbara cove. Barely dries in time for brunch.

THEM: After 12 years of bagging Himalayan peaks, celebrated mountaineer has hairy encounter with a Yeti, famed beast of mythical legend. Divides remaining time between castle in Brussels and the English Parliament.

Though in general I find this magazine pleasant enough, personally, I found this disparity a bit emasculating and though I have absolutely no repressed urges to dog-sled across Siberia in Stilettos or parachute naked into an active Peruvian volcano, an almost imperceptible twinge in my trousers suggested my masculinity was, perhaps, subsequently in question. On the other hand, at least I'll have all of my limbs for my next date, assuming I ever have one.

This is a better than average travel magazine. Good mix of practical type stuff, budget travel ideas, and sort of 'dream trips.' I've read Frommer's Budget Travel in the past, and I like this one somewhat better than that. It is way better than the prestige publications like Travel + Leisure or Conde Nast Traveler, which cater seemingly only to the super rich. 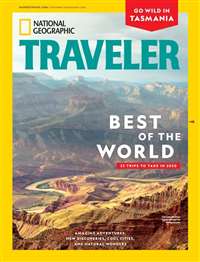