I've had an over four-decade subscription with this magazine.

Not quite sure, but I think I started getting MT when I was fifteen or sixteen; thus, it's been a staple in my life for close to 45 years.

Because of this long association, I can wholeheartedly recommend the magazine for its coverage of the auto industry: developments, innovations, prices, and its history.

The photos of cars from all angles give the reader a great "look" of what he or she may be interested in purchasing.

The magazine has quality editorial content that is both informative and thought-provoking.

MT is the premier auto magazine on the market.

Best automag for the buck

Motor Trend never fails to deliver. I like the fact that they cover such a wide variety of vehicles, everything from SUVs, CUVs, trucks, sportscars, import "tuners", sub-compacts, high-priced exotics, concepts and rumors. The news is fresh and accurate, the issues arrive on time, the mags are thick, pics are crisp, letters are interesting and articles provide usefull information.

I love this magazine. It covers every possible car I like(hehe) and it has a lot of details. Plus, the images are HQ always. Props for the editor.

Been reading since I was a kid. I got my first when I was 10. Thats 48 years ago. Can't go without it every month.

Pros: Its cheap
Cons: Too many articles on high-end cars. Every month it seems like they re-review another Cadillac, or another Mercedes, or another Ferrari. Its very lacking in the economy car, and mid-size car categories. They tend to care little about value or fuel economy and too often leave out very common cars out of their comparison articles. They almost never go back and rereview a car they featured a few years back, which would be great to see how that car has held up after getting some miles on it. It totally lacks any mechanical articles, which would be nice once in awhile. All in all, I wouldn't subscribe if not for the ability to catch a good deal on it once in awhile (.50 cents an issue or less).

Can't Get More Biased Than MotorTrend

I used to read MotorTrend until I started noticing a trend of my own. Every time a German car was compared to American or Japanese cars, the German would always win. When Lexus came out with the world's first 8 speed auto transmission, MotorTrend said, "That's too many gears". When BMW came out later with its own 8 speed auto, it was described as,"Seamless". When MotorTrend came out with its 2010 Car of the Year, the Volkswagen GTI won. Why? The GTI lost to the WRX, MazdaSpeed3 and Mitsubishi Rallyart in every category including 0-60, 1/4 mile, braking, interior space, handling, safety, and price but still came out on top. I wonder how much VW paid MotorTrend to get Car of the Year? How about MotorTrend's comparison of the Mustang and M3 in the article titled, "America's M3". These are totally different cars and of course the M3 won. Price-wise if you comepare the M3 to a Cadillac CTS-V, you'll find that the BMW M3 has no chance in any category with the Cadillac. These are just a few of the trends I noticed. When a lame car like the GTI won Car of the Year, I had enough and never picked up another MotorTrend magazine since. 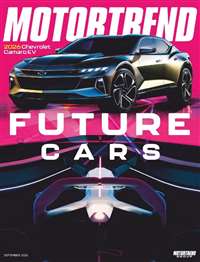