You don't have to live in the Midwest!

Being a resident of the midwest region of our country is not a necessary criteria for enjoying this magazine. While my family originates from the midwest, and we visit occasionally, I enjoy living on the east coast.

This magazine offers more than just the regional perspective. It shares information in a friendly, warm and upbeat manner that is useful and often fun. It's a pleasant read with good information presented in an enjoyable, attractive format.

Every time I finish an issue, I'm reminded of why the people and places of the midwest make me smile.

For Midwesterners, this gives us the feeling that we are more than fly over and gives us tips about great places to go, good places to shop, great places to eat, it's just a fun magazine about our area. Folks who have left the Midwest might enjoy reading it too.

As a native of the Midwest, I find living in Pennsylvania to be a little bit of an adjustment. Midwest Living keeps me informed of all the events should we travel that way (which we do fairly often), and I love the articles!

I really like this magazine - it has lots of good articles in it & great pictures.

Beautiful overview of the Midwest's charms

We've subscribed to Midwest Living for at least a decade, but after moving to Texas, I wanted to remain in the loop on attractions, events, restaurants and recipes in the Midwest.

Midwest Living features articles on uniquely Midwestern flavors (a recent issue featured Midwestern-inspired soups such as Great Lakes salmon chowder from Michigan, Kansas City steak soup, and wild rice and turkey soup from Minnesota), mouthwatering recipes, tips on home and garden (choosing paint, furniture shopping, what plants and flowers will thrive in your zone), travel (including restaurants, suggested hotels, and sightseeing), Lake Michigan getaways, and detailed state-by-state calendars that track events in various Midwestern states. There's a fairly hefty emphasis on fine arts galleries, antiques, and restaurants, so if this sounds like you, you'd do well to check out an issue.

There's something to appeal to everyone, whether you're a Midwesterner or are simply interested in the region. The beautiful photography does justice to the many natural attractions and small-town charm, and the recipes, particularly those featured in well-known restaurants, are keepers. I especially liked the January/February 2008 issue that featured an in-depth article on maple syrup production (although Vermont and Quebec are best known for sugaring, Michigan and Indiana farms also produce maple syrup) and delicious uses for maple syrup, including maple date-nut bread, four-grain pancakes, and maple oatmeal muffins. 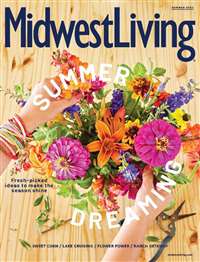