When I first became interested in knives, it was mainly because I found them "exciting". The sheer presence of a blade was enough. Consequently, throughout my early knife-collecting days I repeatedly bought worthless crap. It was only when I began really getting interested in metallurgy and the history of knives that this magazine became an invaluable tool. Along with Blade, another knife magazine, these two have greatly enhanced my knowledge of knives and often been the basis of my acquisition of knifes in the past. One feature I've played around with a little bit is the knifemaking sections... with some fairly devastating effects. There's a reason some people MAKE knives and others just BUY them. Other magazines in this field you might want to check out are Blade, Knife World, and Tactical Knives.

I don't read this magazine, I just flip through the great style choices of the men depicted.

Nylon Guys = This is not your average magazine about guys

This magazine I think is geard towards gothic type guys and guys who are geeky guys but not your average reader who may like Details magazine ! 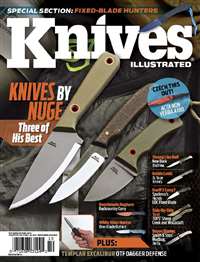