Great magazine!!! Always look forward to receiving each monthly issue. Loads of info on training techniques, diets, supplements, latest scientific studies on nutrition as well as informative articles and excellent pics featuring all the top bodybuilders on the planet. A must have magazine for all persons serious on making health and fitness a lifestyle.

Better than I thought

This magazine surprised me when I picked up the October 04 issue. I had expected it to be as bad, if not worse than Muscle and Fitness, a magazine of rehashed info. The issue I picked up, however, had articles on upcoming, and top bodybuilders.

Full of color photos, the magazine is great motivation, and the workout info is great as well. I do, however agree, that most of the guys in there are probably juiced so much, an average guy shouldn't think he'll get that physique.

All in all, good info, good motivation (images).

A decent magazine for a hardcore gym rat.....

I like this magazine a lot better than Muscular Development magazine. MD claims to be the biggest magazine, but that's to their disadvantage. MD is too hardcore, but after a while all the articles contain the same content. All of the pages are a lot of the same old stuff. Flex magazine is new and fresh every month. It is a little bit commercialized, but it makes it able to be read by either male or female workout enthusiasts/bodybuilders. It is filled with a lot of unorthodoxed workout routines to help add some spice to a plateauing workout. I used to subscribe to Flex, but switched to see what all the hype was about on all the other magazines. Now I'm back and I would definitely recommend this magazine to anyone who works out.

About SERGIO OLIVA in new issue of Flex.....

I am glad to see that the Weiders are once again featuring The Myth-Sergio Oliva in the mainstream Weider publications.

Oliva made quite an impact back in the 60's. He had an an incredible V-shape and was huge. When Sergio hit a most muscular shot--it was positively mind blowing! Then Oliva would throw those huge arms overhead and hit his signature pose which nobody could come close to.

My only complaint with the articles was the inference that Sergio won NABBA/WABBA and WBBG shows against "mediocre" competition?

Serge Nubret, Bertil Fox, Kalman Szkalak, Dave Johns and Tony Pearson, just to name a few, could hardly be called "mediocre" competition. Nubret beat Ferrigno, Zane, Columbo and others and all of the above mentioned men were Mr. Universe winners.

Flex mag is a great hardcore mag. Great you are doing features on Oliva, how about doing one on Nubret and Draper now.

Depending on what your looking for....

Yes FLEX is a good magazine (I've been a subscriber for many years), however it depends on what is it that you're looking for in weightlifting and nutrition. If you inspire to look like these gentlemen on the covers of FLEX, ok. But if your looking to be fit, eat healthy, be active, FLEX might be a little to much for you. After a while you'll realize that you will not (and would not want to) look like most of these giants of the sport. On a positive side, the pictures and routines are very helpfull and motivating. And their nutrition articles are helpfull too.

Is this what your really looking for?

Flex is a great magazine. I'm not afraid to say it, but what I am afraid to say is that every person in this magazine is on about a thousand dollar a month steroid budget. I liked the training tips given, however, and I think that the routines are well-rounded, and give people much more muscle. If you are an incredibly intense musclehead, then this magazine is for you. If you are intrested in looking good rather then having "sick" biceps then try a magazine like Muscle and Fitness, a more fitness diversified magazine.

DO NOT WASTE YOUR MONEY AND TREES

This is a magazine for those who want to be huge and sick. I've been into bodybuilding and sports overall for more than 10 years and I can assure you that all those guys who pose for this mag are not healthy. It is impossible to carry all that weight and be in a good health.
Secondly, on average this magazine has 300 pages, 200 of which sole advertising!!! Just think of it, more than half is ads!!! I wonder, is this magazine for sales people or bodybuilders.
Third, as I mentioned already, if you want to be a guy with tons of fake and useless muscles + very sick (health wise), this resource is just for you. Otherwise, run do not walk!
Finally, it took me a while to find some articles, everything you can see is pictures of gorillas with lots of muscles.
Hope it helped. 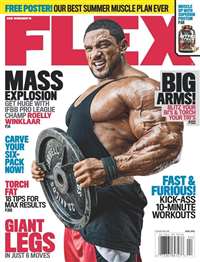